A Device for Self-Photography in 1912 — The Amateur Photographer's Weekly

Long before the smartphone with its front-facing camera, long before even the selfie stick, there were devices for "self-photography." The Amateur Photographer's Weekly includes a short but helpful description of a simple tool that could be used with most cameras of the day, a series of wooden posts that could be used to run a string from the shutter lever to the photographer's hand. A configuration like this wouldn't make sense with cameras at the time because, unlike later camera designs, the shutter was usually a lever that could be pulled down, not a button that needed to be pushed in.

A Device for Self-Photography 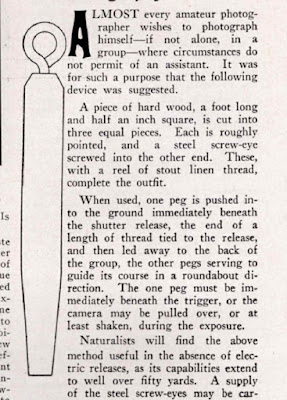 ALMOST every amateur photographer wishes to photograph himself—if not alone, in a group—where circumstances do not permit of an assistant. It was for such a purpose that the following device was suggested.

A piece of hard wood, a foot long and half an inch square, is cut into three equal pieces. Each is roughly pointed, and a steel screw-eye screwed into the other end. These, with a reel of stout linen thread, complete the outfit.

When used, one peg is pushed into the ground immediately beneath the shutter release, the end of a length of thread tied to the release, and then led away to the back of the group, the other pegs serving to guide its course in a roundabout direction. The one peg must be immediately beneath the trigger, or the camera may be pulled over, or at least shaken, during the exposure.

Naturalists will find the above method useful in the absence of electric releases, as its capabilities extend to well over fifty yards. A supply of the steel screw-eyes may be carried and screwed into convenient trees, posts, etc., taking care that the thread is not in contact with anything other than the eyes.